I met these two dudes at a party in Brooklyn about a week ago. The party was pretty insane - everything was red and gold themed. All red food, including rare beef tenderloin, red sour cherry gummy candy (one of my faves), watermelon kabobs, etc. The decor was mainly gold, and including a huge table centerpiece that was an entire cow skull sprayed glittery gold and about 20 gold mannequin heads hanging from the ceiling. It was all very well done.

Anyway, I stuck around for the cutting of the cake to see what people said. The cake (totally didn't take a picture - doh!) was all red and gold glitter, and was a vanilla bean butter cake with vanilla bean buttercream. It was pretty spectacular, actually. So the cake gets cut and people start flipping out over it. So many people came up and said such nice things. I can usually tell if a cake is well-liked by checking around and counting how many pieces are left on plates with forks in them. I honestly don't remember seeing even one. It was a good feeling.

So then yesterday, I get these incredibly nice emails from these guys I met. Well, just lookie how nice: 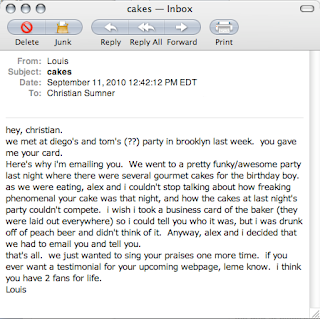 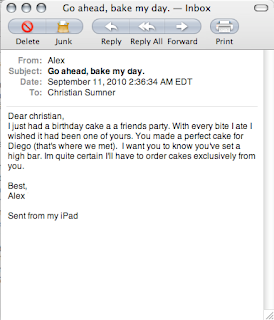 I was so flattered that not one, but BOTH of these guys wrote me to say such nice things. It really meant a lot to me.

Anyway, I just wanted to share that. It made me feel warm and fuzzy inside.
at 10:58 AM

Lol that's really nice of them! Must be tasty.

How can I get a hold of your caramels? Sounds like they would make a great gift.

Hey! Just send me an email to get the ball rolling. Thanks!
jchristiansumner@gmail.com